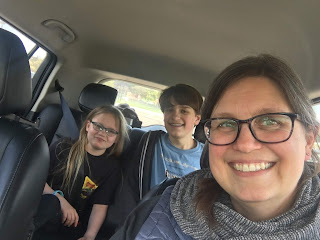 Our daily commute together to school is about 30 minutes, giving us an hour together in the car every day. And our commute has always included stories.

We recently went down the rabbit hole of trying to remember as many of the audiobooks we have read together as we could. With some help from twitter and goodreads, we remembered over 100 books we shared, and we keep remembering more!

Thinking of each of these books stirs strong feelings.
I know my love for many of them is greater because we read them together.


Many, many thanks to the Hennepin County Library system and their collection of fabulous audiobooks that has always supplied our commute with great stories!
Posted by Laura5 at 9:10 AM 30 comments 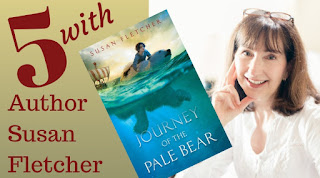 "Once, she struck fear into the hearts of hardened soldiers, swam for leagues in the sea without stopping, withstood a hail of arrows, waged battle against pirates, rescued a boy who had come to love her, and was flaunted and prized by kings. Once long ago... when she and I were young."

Journey of the Pale Bear was inspired by a real gift, a Polar Bear, given from the King of Norway to the King of England in 1251.


Publisher's Book Description:
The polar bear is a royal bear, a gift from the King of Norway to the King of England. The first time Arthur encounters the bear, he is shoved in her cage as payback for stealing food. Restless and deadly, the bear terrifies him. Yet, strangely, she doesn’t harm him—though she has attacked anyone else who comes near. That makes Arthur valuable to the doctor in charge of getting the bear safely to London. So Arthur, who has run away from home, finds himself taking care of a polar bear on a ship to England.

Tasked with feeding and cleaning up after the bear, Arthur’s fears slowly lessen as he begins to feel a connection to this bear, who like him, has been cut off from her family. But the journey holds many dangers, and Arthur knows his own freedom—perhaps even his life—depends on keeping the bear from harm. When pirates attack and the ship founders, Arthur must make a choice—does he do everything he can to save himself, or does he help the bear to find freedom?

The tender connection that grows between Arthur and the bear will certainly be echoed in readers' hearts.  Journey of the Pale Bear is a perfect choice for animal lovers and fans of survival-adventure stories alike.

Author Susan Fletcher stopped by to answer my 5 questions:


Welcome, Susan, thank you so much for visiting LibLaura5!

Thank you so much for inviting me! What an honor and a treat!
1. The fact that a “pale bear” was given as a gift to the King of England from the King of Norway in the mid 1200s is fascinating on its own--at what point did you know that this idea should be a story for young readers?

Right away, as soon as I read about that bear in Daniel Hahn’s book, The Tower Menagerie! I mean…a polar bear swimming in the Thames River in medieval times? Irresistible! But, as often happens, I didn’t really know how to frame the story. Where to begin? What would the main conflict be? How could I put a kid at the heart of the story? I mulled this over for a year or two…until one day, in a book store, I stumbled upon José Saramago’s The Elephant’s Journey. Instantly I realized that the bear’s journey from Norway to England would make for a thumping good tale, and I was on my way. 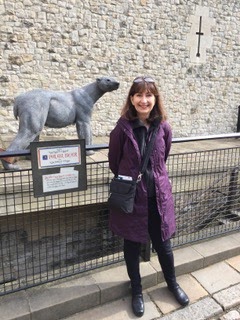 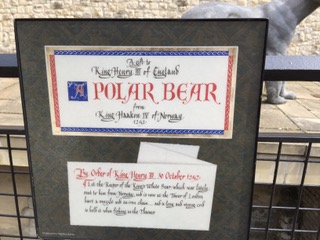 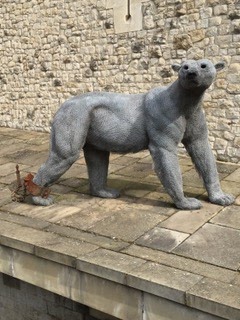 3. What surprised you while working on Journey of the Pale Bear?

I had started out thinking that the bear would be a male, and that Arthur and the bear, once they got comfortable with each other, would have a two-guy adventure dynamic, sort of a road trip bromance. But the more I thought about how dangerous young male polar bears are, the more uncomfortable I became with that idea. It seemed less and less plausible that Arthur would have emerged unscathed. Reluctantly, I changed the bear to a female, a mother who had probably been separated from her cubs. What surprised me after that was discovering that I had already put in some of the chemistry to make the mother-cub dynamic work. From the get-go, I had Arthur humming to calm the bear. To my astonishment, I found out, through later research, that polar bear cubs make a sort of humming sound to their mothers! Also, from the very start, I had had the bear reach a paw to the edge of the cage to press against Arthur’s boot. I found out later that polar bears reach out their back paws to touch their cubs as they sleep! Kind of spooky how that happened…but it made me feel that having the bear be a female was the best choice all along.

4. I hope readers of Journey of the Pale Bear…

...will be caught up in the adventure, unable to put the book down, and that the world will feel somehow broader—bigger and more full of ideas than they had imagined—by the time they read the last page.

5. Sharing the books we love is a way we share about ourselves and connect with each other. What is one book that has been important in your life?

When I was in fourth grade, my teacher read Beverley Cleary’s Ellen Tebbits to our class. Now, fourth grade was the year for long division and, though I did my homework, I just couldn’t seem to get it. I felt there must be something wrong with me. My teacher obviously disapproved, and I got terrible grades on my math papers. But listening to her read Ellen Tebbits…helped, somehow. Because Ellen messed up in that book. She did some stuff she really shouldn’t have done. But nobody gave up on her, and she made it through. And I could tell that my teacher really liked Ellen, in spite of everything. It sort of put my math troubles in perspective, and it made me feel that maybe everything would all come out okay. So, sometimes people ask me why I put my characters in so much trouble…and that’s kind of it. Because we all have troubles, of one kind or another, and it is affirming to see someone—even a character in a book—struggle through and come out okay in the end.
Thank you, Susan! 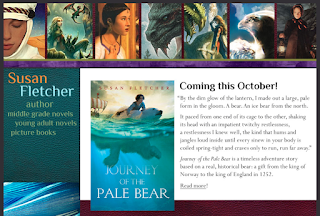 Find Journey of the Pale Bear on...

About Susan Fletcher:
SUSAN FLETCHER is the acclaimed author of the Dragon Chronicles as well as the award-winning Alphabet of Dreams, Shadow Spinner, Walk Across the Sea, and Falcon in the Glass. Ms. Fletcher lives in Bryan, Texas. To read about the fascinating story behind the inspiration for Journey of the Pale Bear, visit her website, SusanFletcher.com 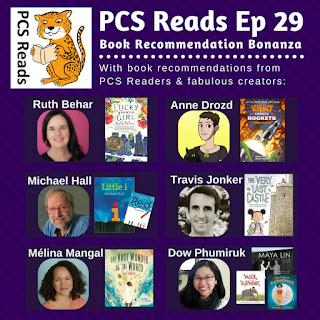 It's an end of summer book recommendation bonanza featuring authors, illustrators and cartoonists along with PCS Readers recommending great books to cap off your summer and start a new school year with some fabulous reads.

Visit pcsreads.blogspot.com/2018/08/ep29.html to listen and for more details about the episode. 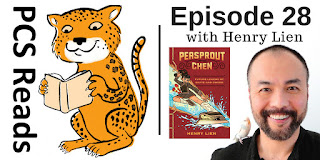 Visit pcsreads.blogspot.com/2018/08/ep28.html to listen and for more details about the episode. 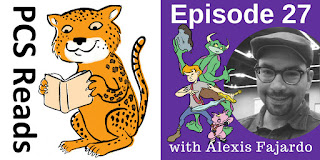 Visit pcsreads.blogspot.com/2018/07/ep27.html to listen and for more details about the episode. 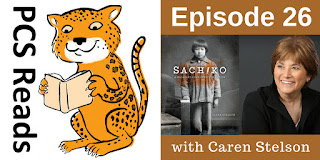 Visit pcsreads.blogspot.com/2018/07/ep26.html to listen and for more details about the episode.


Subscribe to PCS Reads through Apple Podcasts.
Posted by Laura5 at 5:55 PM 0 comments 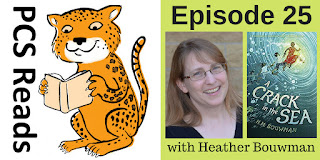 Visit pcsreads.blogspot.com/2018/06/ep25.html to listen and for more details about the episode,