5 with Elana K Arnold - Author of A Boy Called BAT 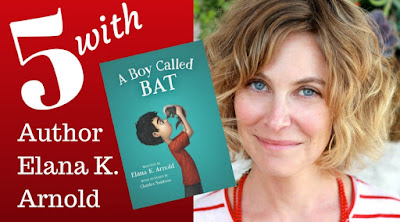 A Boy Called BAT is a tender story about Bixby Alexander Tam, known as Bat, who is determined to be a good caretaker for an orphaned skunk kit.

Enjoy today's interview below and be sure to scroll down to enter the giveaway for a signed copy of A Boy Called BAT. 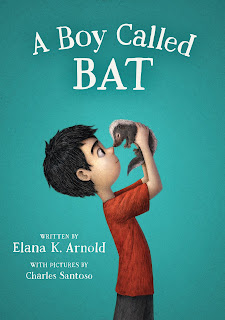 Welcome, Elana, and thank you for stopping by LibLaura5 to answer my 5 questions!

1. I love BAT because he reminds me of many students I have known through my teaching career. How did his character come to you?
I had dropped my daughter off at rehearsal and was driving to a coffee shop to do some work while I waited for her. It was night, and I was in the turn lane waiting for my light to turn green. And then, a name came to me: Bixby Alexander Tam. In an instant, even before the light turned, I realized that the initials of his name formed a word—BAT—and that this name was perfect for him because I knew that he loved animals, that he had bat-like qualities, and that I loved him.
2. Skunks are …adorable, and fluffy, and also nearsighted and bumblingly slow.

3. What is the most unusual animal you have had for a pet?
We had the great pleasure of being the caretakers of Vegas, Ferret of the World, so called because he was the best ferret to ever, ever live. For ten years, he leapt after yelping children, nipping at their ankles; he wrestled with Sherman, our cockapoo; he slept in my sweater drawer; he stole and hid rubber duckies. He was deaf and rather stinky, yes, and he never did quite work out the intricacies of the litterbox, but he was an Arnold through and through.

4. I was thrilled to discover that A Boy Called BAT is the first in a series. Is there anything you can share about what will be coming in the future?
Yes! I’m excited to share that the second book in the series, BAT AND THE WAITING GAME, will be out next year. Here are a few words about it:

For Bixby Alexander Tam (nicknamed Bat), life is pretty great.  He’s the caretaker of the best baby skunk in the world—even Janie, his older sister, is warming up to Thor.   When Janie gets a part in the school play and can’t watch Bat after school, it means some pretty big changes.  Someone else has to take care of the skunk kit in the afternoons, Janie is having sleepovers with her new friends, and Bat wants everything to go back to normal.  He just has to make it to the night of Janie’s performance... Elana K. Arnold returns with another story of friendship starring an unforgettable boy called Bat.

5. Sharing the books we love is one way we share about ourselves and connect with each other. What is one book you loved as a child?
When I was a young reader, I adored Beverly Cleary’s RAMONA books. I couldn’t have clearly explained then why the books were important to me, but now I can see it’s because Cleary allowed the things that are a big deal to young people to feel like a big deal; she didn’t try to talk Ramona (or her readers) out of feeling big, messy feelings. Ramona feels angry and upset and affronted about things that some adults would say weren’t big deals, that the kid should have more perspective or just “get over it.” But Cleary allowed her young heroine to stew in those feelings and work through them on her own terms, something I aim to do with Bat.

ENTER to win a signed copy of A Boy Called BAT!

Find A Boy Called BAT on...

Visit the other stops on the A Boy Called BAT Blog Tour: